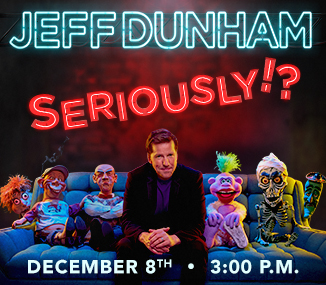 From the U.S. Cellular site: For the past twelve years, Jeff Dunham and his somewhat-inappropriate-proteges, Peanut, Walter, José Jalapeño, Bubba J. and Achmed the Dead Terrorist, have filled arenas across the U.S. and the world with their multiple, blockbuster tours. This fall, Dunham and his cohorts will set out on their brand-new international tour, “JEFF DUNHAM: SERIOUSLY!?” Dunham and his guys will be hitting cities, crisscrossing North America, Canada, and, not long after that… the world!

Full details about his tour at  www.jeffdunham.com and details specific to his December 8 show in Cedar Rapids can be found at http://uscellularcenter.com/event/jeff-dunham-seriously/