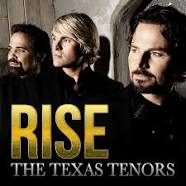 The Texas Tenors in Concert-Win Tickets!
First they returned to wow the audience on America's Got Talent: The Champions...now Iowa natives John and Marcus are returning to their home state of Iowa for The Texas Tenors Thursday, February 13 at the Paramount Theatre!

From the Paramount Theatre website:  From Bruno Mars to Puccini, Marcus Collins, John Hagen and JC Fisher treat audiences to a unique blend of country, classical, broadway and current pop music. The Texas Tenors are the most successful music group and third highest selling artist in the history of America's Got Talent! Since appearing on the show in 2009, JC, Marcus and John have released 4 studio albums, 2 PBS Specials, 4 DVDs, multiple singles and a children's book that have earned them impressive recognition including 3 Emmy Awards, The Gelett Burgess Award for Excellence in Children's Literature and the distinction of being Billboard Magazine's 2017 #10 Classical Crossover Artist in the World.

Win a pair of tickets from Rewards!